Things keep moving along.  While the earth moving machine is still breaking the masonry and moving earth the team building the walls has had materials delivered and begun to dig down to find a solid footing for the retaining walls. 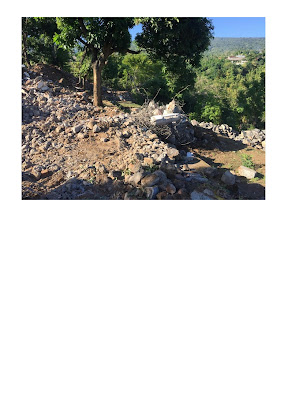 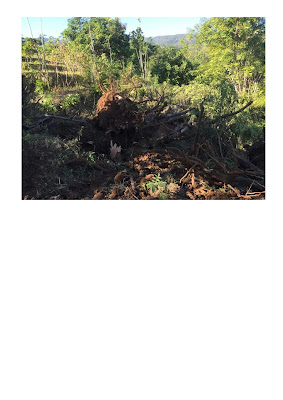 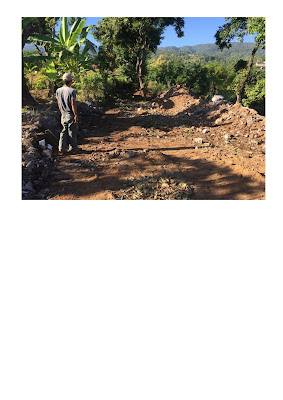 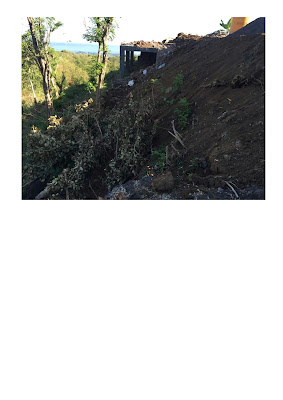 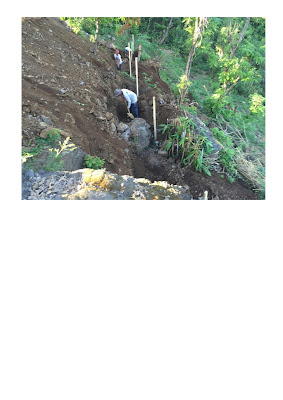 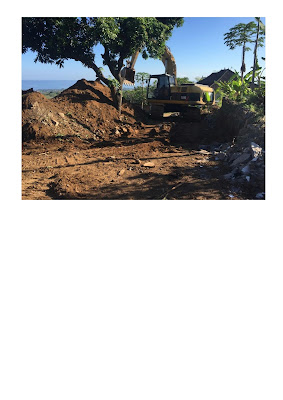 Plans for a house, Part 2

Things keep moving along.  New drawings, including some elevations have come today.  Most interesting! :) 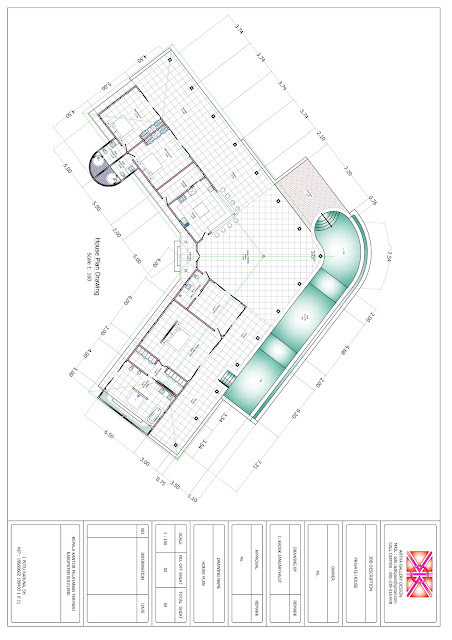 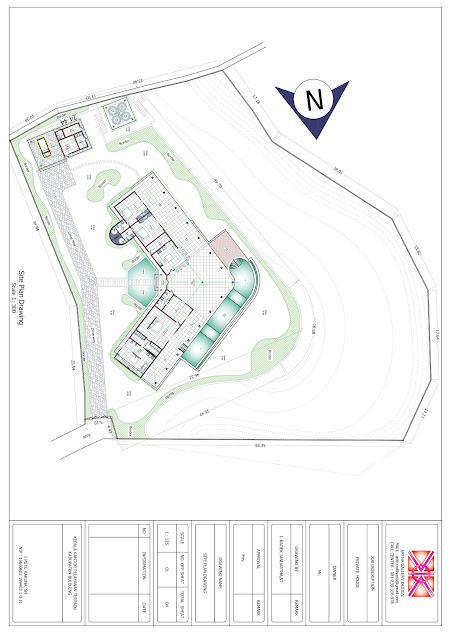 No more houses on our plot after 3 days! 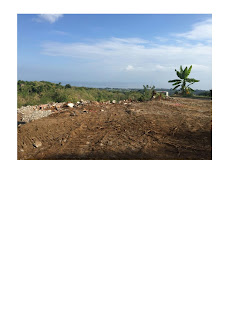 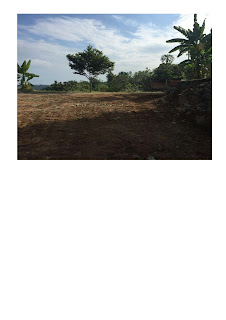 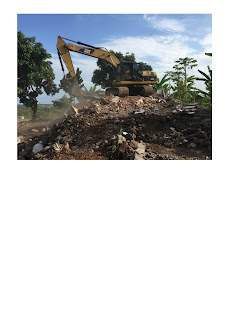 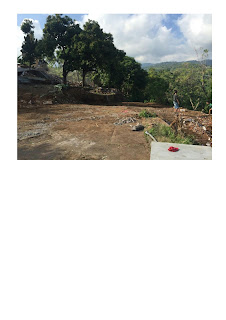 Plans for a house, Part 1

Coming up with a design for a house to build in the tropics on a mountain side is a real challenge.  There are so many possibilities and we do not have a lot of experience with this.  Fortunately, we were able to visit a number of relatively modern houses in north Bali in a two week period of time.  Plus we had a two week rental in a superb house which we had been considering to buy.  However, it got sold before we could decide.  It was modern, open with very high ceilings and had an 18 meter pool.  It is an absolute requirement to have a pool of at least 18 meters for Susan's daily swim.

Susan and I spent a weekend drawing primitive sketches of potential designs going from A to Z.  I was focused on a small compound like a Balinese Kampung and Susan focused on a house with everything under one roof.  Besides a long pool, we felt that we needed a large and very open living space adjacent to a modern kitchen that could be used by us as well as Balinese staff.  Furthermore, a master bedroom area separate from other bedrooms plus an open-air bathroom which is typically seen in Bali villas.  Of course, we need a nice guest area that could be self contained.  We might rent the house when we are sailing and would prefer to have our master bedroom area kept private for those occasions.  We think two large guest rooms each with a large glass door for a sea view and a private bath/shower would do the job.  We are also in favor of having a small office/study adjacent to the master bedroom area with a bath that could also potentially be used for guests.

Here is the first drawing that we actually chose to follow thru on.  Susan did the preliminary sketch, then Roland redid it to get the scale more true to what we wanted.

Next came the work of Kadek, the architect.  Kadek's wife just had a new baby, so he was not able to join us with Roland for the first couple of work sessions.  I think that worked really well, as we were able to go back and forth with Roland and refine what we were really looking for.
After only a couple of iterations and some back and forth, Kadek had a drawing that was really close to what we think we would like to build.

We spent 3/4 of a day with Roland going over details like heights of doors, windows, kitchen counters, roof tile, floor tiles and terracotta all the way to kitchen sink faucets and shower fixtures.  It was exhausting and I am sure that we will have to modify some of those items, but at least we began to have a "granular" think about it all.

We have not seen an "elevation" so really do not have a feel for the "look" of a house like this.  We have some ideas for the roof which may be great, but may be odd or impractical.  We shall see.

At the risk of statiing the obvious, our plot needs to be prepared before we can build a new house.  Two main tasks are necessary: 1) remove the old buildings and 2) grade the ground to have a nice large surface to build upon.

There were three old buildings.  Shown on the left is one of the two small houses that has had all wood and roof tiles removed and recycled.  The masonry remains to be leveled.

In the second photo, the machine for leveling has already taken down the the small house and leveled around it.  Wow!  Now you see it and now you don't!

The third photo shows the machine used to move walls and earth.  I has already taken down the walls of the first small house. 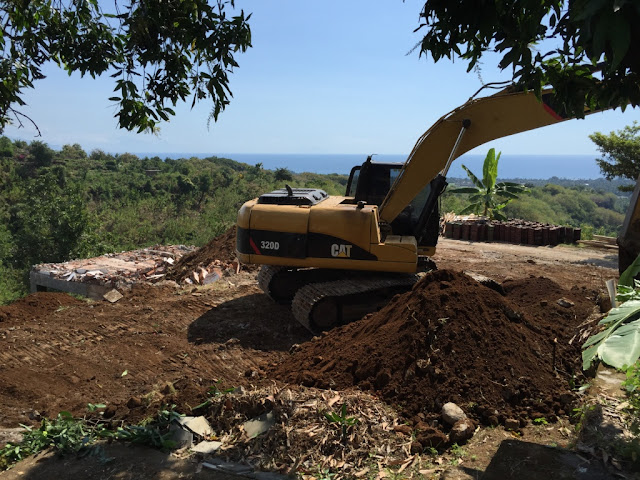 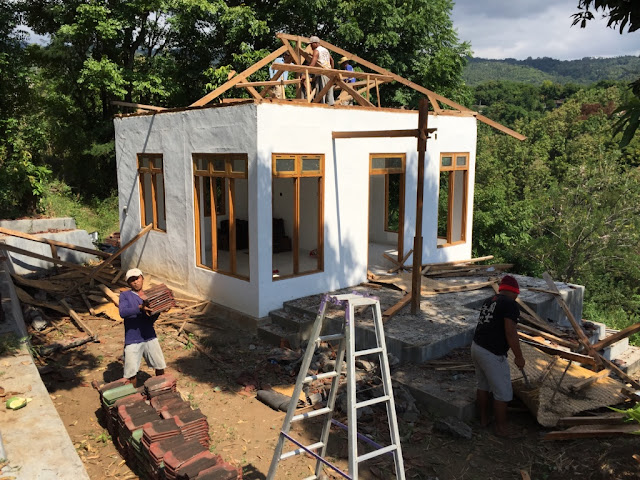 Decision to build a house in Bali

We have known for some time that we would like to remain in southeast Asia, but just where has been a recurring theme.  Well, that has changed.  We have been traveling to Bali and/or cruising in Indonesia for a number of years.  We has also spent a lot of time in Thailand and Thailand has certainly been good to us.  But Bali in Indonesia has won our hearts and minds.  The Balinese people are remarkably warm, talented and have a language we hope to master.  At least the alphabet looks familiar.

Bali is a dense, highly variable island with many cultures and many terrains.  Mountains, lakes, oceans, beaches, Hindus, Moslems, Christians, urban, suburban and rural; they are all there in a relatively small space with over 4 million people.  You cannot go anywhere in Bali without constantly noting the centuries old culture and way of living.  There are beautiful rice fields, thousands of temples, strange and wonderful statues, all among villages, farms and forests.  It is truly amazing and truly overwhelming.  But that is true for most of southeast Asia.

We have decided on north Bali in the village of Kayuputih, across the mountain from Denpasar, Kuta, Sunor and Ubud.  It's hard to get here, hence, the development has come in a trickle instead of a torrent.  Yet, all is to be found there.  There is even a superb five star lodge (The Damai) only 5 minutes from where we will build.  However, around our neighborhood is a village of mostly Balinese and a few foreigners.  Bananas, papayas and pigs are all thriving next door! The beach resort area known as Lovina is less than 20 minutes away.

As in most of Asia, owning land outright is not permitted.  Instead one works through Indonesia citizens who buy the desired property and then provide a very long term lease and other legal instruments to make it possible to have some akin to "home ownership".  It is a bit complicated, but it seems to work.  We were accustomed to this in Thailand and it worked quite well for us there.

We "bought" a plot located "click here".  Our plot measures 43 are or 4300 square meters.  Another way to look at this is that it is about an acre.  Much of it goes down at a 45 degree angle, so the first step is to bring in heavy machines and remove the old houses and make a 2000 square meter flat area to build a house, pool and gardens. 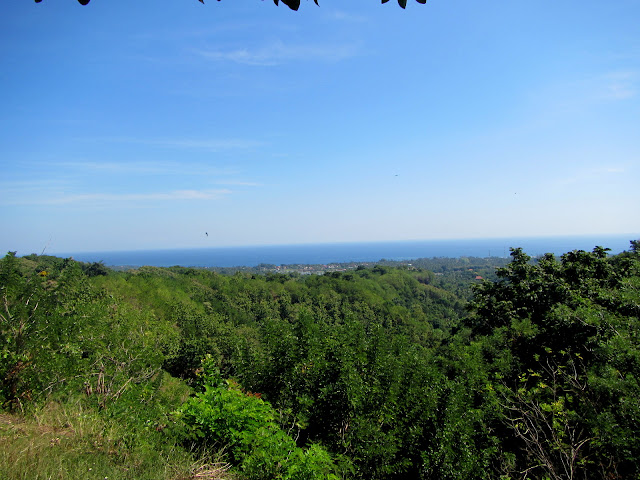 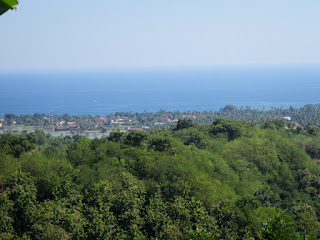 This is the view of the Java Sea looking to the northwest.  On the coast are the villages that make up the area called Lovina.  The tree closer in are a ridge between us and the sea in that direction.

The last photo shows the old house that will come down.  Subsequently, the bit of hill will be leveled out to the toward the right to make a nice flat area for building.  The plot has the big house and two smaller ones, each on a different level. 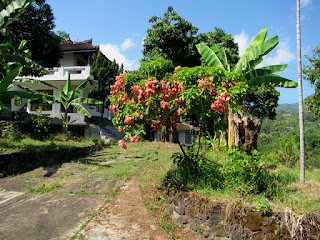 Dana on Villa G
I'm Dana and my wife is Susan. We live and sail in southeast Asia. In the last 4 years we have cruised from the Andaman Islands, to Thailand, Malaysia, Indonesia and to the north of Australia. Probably the best cruising area was the region of West Papua Indonesia in and around Triton Bay (Tekuk Triton). The water there is filled with marine creatures. The snorkeling and diving is exceptional. We invite you to learn more by checking our website: www.villa-g.com